Reno, Nevada, April 15, 2021 – i-80 GOLD CORP. (TSX:IAU) (“i-80”, or the “Company”) is pleased to announce that, together with its wholly-owned Delaware subsidiary Premier Gold Mines USA, Inc. (“PG USA”), it completed the previously announced purchase agreement with affiliates of Waterton Global Resource Management, Inc. (“Waterton”) to acquire from Waterton all of the outstanding membership interests of Osgood Mining Company LLC (“Osgood”). Osgood is the owner of the Getchell Project in the Getchell gold belt near Winnemucca, Nevada (“Getchell” or the “Getchell Project”) for consideration consisting of US$50 million in cash and common shares, plus contingent value rights and warrants as described in more detail below (the “Transaction”).

The Getchell Project is located at the intersection of the Getchell gold belt and the Battle Mountain-Eureka trend immediately south of Nevada Gold Mines’ Turquoise Ridge operation. Open pit mining occurred on the property between 1980 and 1999 and underground test mining (the Pinson Mine) was conducted in the early 2010s. The Project currently hosts both a high grade open-pit and underground deposits (see table 1 below) and the Pinson Mine has been in care and maintenance since 2015. 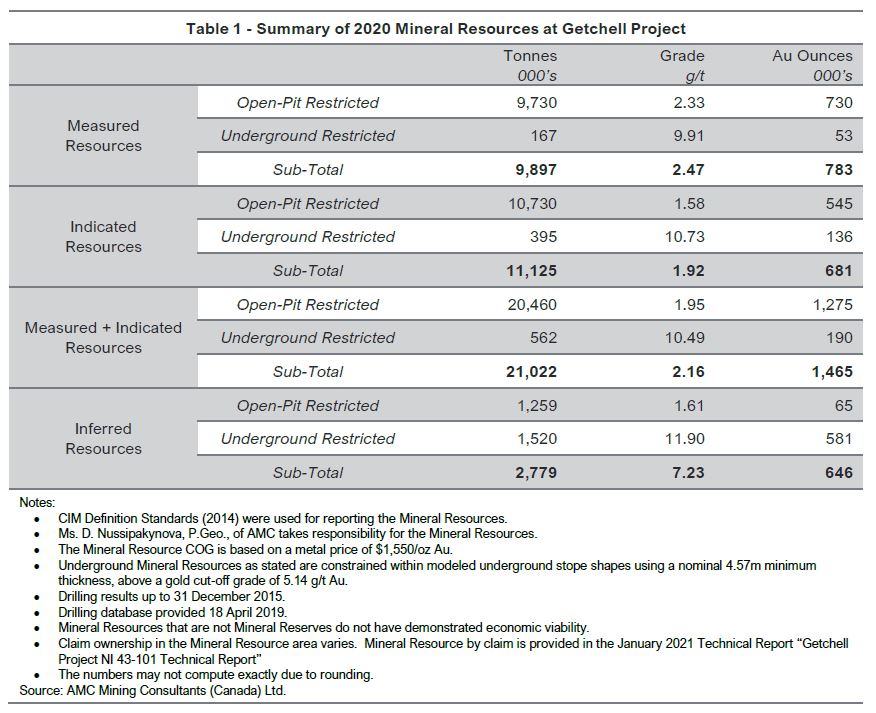 The Getchell Project will be the focus for the Company in 2021 with a +22,000 metre drill campaign designed to upgrade and expand mineralization within both the underground and open pit horizons. The Company is currently progressing work on a Preliminary Economic Assessment for the Project that is expected to be released during the current quarter. Permitting for the purposes of developing an open pit at Getchell is expected to be initiated in the near future.

Ewan Downie, Chief Executive Officer of i-80, commented: “The Getchell Project is strategically located proximal to the Turquoise Ridge and Twin Creeks mining operations of Nevada Gold Mines. We look forward to immediately commencing a major drill campaign aimed at advancing the development of the high-grade Pinson underground mine within the next twelve months, while at the same time progressing permitting of the open pit, heap leach, mining opportunity.”

Consideration paid to Waterton consisted of (i) US$23,000,000 in cash, (ii) 13,036,846 common shares of i‑80, (iii) warrants to purchase 12,071,152 common shares of i-80, with an exercise price C$3.64 per common share, for a period of 36 months following the closing date, and (iv) contingent value rights include a payment to Waterton in the amount of US$5,000,000 upon the public announcement of a positive production decision related to the Getchell Project (underground or open pit), and an additional US$5,000,000 upon production of the first ounce of gold (excluding ordinary testing and bulk sampling programs) following a 60 consecutive day period where gold prices have exceeded US$2,000 per ounce. The common shares and warrants issued are subject to a statutory hold period under applicable Canadian securities legislation expiring on August 15, 2021.

Tim George, PE, has reviewed and approved the scientific and technical information contained in this press release and is a “qualified person” within the meaning of National Instrument 43-101 – Standards of Disclosure for Mineral Projects of the Canadian Securities Administrators.

The securities referenced herein have not been, nor will they be, registered under the United States Securities Act of 1933, as amended, or any state securities law, and may not be offered, sold or delivered, directly or indirectly, within the United States, or to or for the account or benefit of U.S. persons, absent registration or an exemption from such registration requirements. This news release does not constitute an offer to sell or the solicitation of an offer to buy nor shall there be any sale of securities in any state in the United States in which such offer, solicitation or sale would be unlawful.

i-80 Gold Corp. is a Nevada-focused mining company with a goal of achieving mid-tier gold producer status. In addition to its producing mine, El Nino at South Arturo, i-80 is beginning to plan for future production growth through the potential addition of the Phases 1 & 3 projects at South Arturo and advancing the development of the Company’s Getchell and McCoy-Cove Projects.

Certain statements in this release constitute “forward-looking statements” or “forward-looking information” within the meaning of applicable securities laws, including but not limited to, the drill program at Getchell, the benefits of the acquisition and timing of the PEA. Such statements and information involve known and unknown risks, uncertainties and other factors that may cause the actual results, performance or achievements of the company, its projects, or industry results, to be materially different from any future results, performance or achievements expressed or implied by such forward-looking statements or information. Such statements can be identified by the use of words such as “may”, “would”, “could”, “will”, “intend”, “expect”, “believe”, “plan”, “anticipate”, “estimate”, “scheduled”, “forecast”, “predict” and other similar terminology, or state that certain actions, events or results “may”, “could”, “would”, “might” or “will” be taken, occur or be achieved. These statements reflect the Company’s current expectations regarding future events, performance and results and speak only as of the date of this release.

Forward-looking statements and information involve significant risks and uncertainties, should not be read as guarantees of future performance or results and will not necessarily be accurate indicators of whether or not such results will be achieved. A number of factors could cause actual results to differ materially from the results discussed in the forward-looking statements or information, including, but not limited to: material adverse changes, unexpected changes in laws, rules or regulations, or their enforcement by applicable authorities; the failure of parties to contracts with the company to perform as agreed; social or labour unrest; changes in commodity prices; and the failure of exploration programs or studies to deliver anticipated results or results that would justify and support continued exploration, studies, development or operations.