Reno, Nevada, July 12, 2022 – i-80 GOLD CORP. (TSX:IAU) (NYSE:IAUX) (“i-80”, or the “Company”) is pleased to announce that initial step-out drilling to test the southern extension potential of the Ruby Deeps deposit has intersected multiple zones of high-grade mineralization at the Company’s 100%-owned Ruby Hill Property (“Ruby Hill” or “the Property”) located in Eureka County, Nevada.

Hole iRH22-06 is the southernmost core hole drilled to test the Ruby Deeps horizon and confirms the potential to expand high-grade mineralization within the Ruby Deeps Zone that remains open along strike to the north and south, and to the east.  In the southern portion of the deposit, drilling is intersecting multiple (4) structures, suggesting the potential to define resources in multiple horizons (see Figures 1 & 2 and Table 1). As in previous drilling in the Ruby Deeps Zone, ground conditions appear to be very favourable and intersection widths have met or exceeded expectations. The primary zone, located beneath the “Bullwacker” sill, returned an impressive 19.8 grams per tonne (g/t) gold (Au) over 33.2 metres (m), interpreted to be near true width.

Additional drilling is now being completed in the southern portion of the deposit. The Ruby Deeps deposit is comprised of the 426 Zone; the upper part of the deposit interpreted to consist of sub-vertical mineralization hosted within or proximal to the northeast striking 426 fault structure, and the deeper Ruby Deeps Zone; a flat-lying, north-south striking, sulphide zone located in the hanging wall of the Holly fault structure. Both zones remain open for expansion.

Due to substantial success of the 2022 program at Ruby Hill has been expanded such that more than 20,000 metres of drilling will be completed. This program is focused on defining, and expanding, the Ruby Deeps Deposit, including the upper “426” horizon, while also testing several high-potential exploration targets on the Property. Initial results from drilling in the 426 horizon are expected in the coming weeks.

The ongoing infill and step-out drill program will aide in the advancement of the Company’s plan to develop an underground mine at Ruby Hill, accessed via ramp from the Archimedes open pit.  Infill drilling is being completed for initial mine planning and to upgrade resources for the completion of an economic study.  Step-out drilling is also being completed with a focus on expanding mineralization in advance of completing a revised resource estimate at year-end. The current program at Ruby Hill is one of several ongoing and planned drill programs on i-80 projects in 2022 that collectively are expected to comprise in excess of 50,000 metres.

It is expected that refractory mineralization from the planned underground operation at Ruby Hill will be trucked to the Company’s Lone Tree facility, once operational, and oxide mineralization can be processed on-site at the existing heap leach pad, or at the existing CIL plant. i-80’s substantial existing infrastructure at Lone Tree and Ruby Hill is expected to reduce potential exposure to the current inflationary environment.

“It is extremely encouraging to see multiple zones of high-grade mineralization developing in the southern portion of the Ruby Deeps zone, continuing to demonstrate the property’s potential to host a world-class, Carlin-type, gold deposit.”, stated Ewan Downie, CEO of i-80. “In addition to successfully expanding mineralization in the primary target zones, significant alteration and mineralization has been observed in multiple exploration targets that have been tested. The footprint of the alteration system at Ruby Hill is comparable to Nevada’s most productive gold districts. I have been fortunate to have been a part of several significant discoveries and the delineation of major deposits, but perhaps have not participated in a project with the upside potential we are seeing at Ruby.” 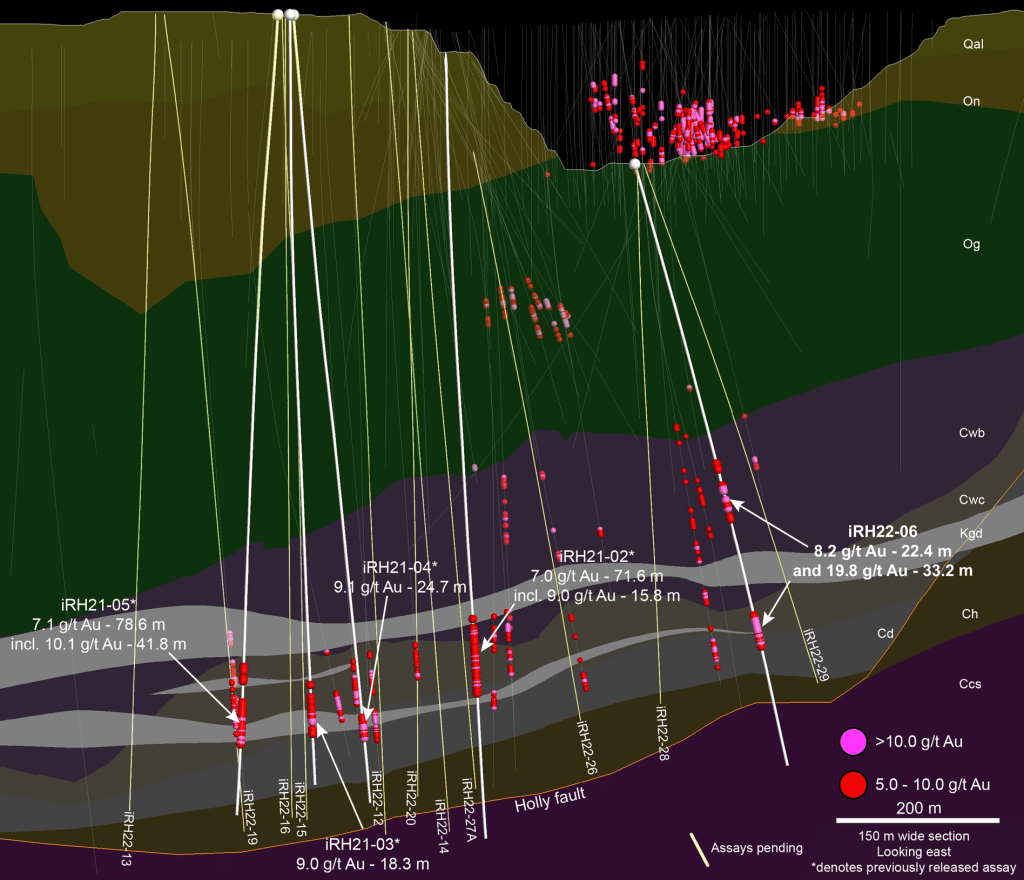 The Ruby Hill Property is one of the Company’s primary assets and is host to the core processing infrastructure within the Eureka District of the Battle Mountain-Eureka Trend including a CIL plant and an active heap leach facility. The Property is host to multiple gold, gold-silver and poly-metallic (base metal) deposits.

All samples were submitted to ALS Minerals (ALS) of Sparks, NV, which is an ISO 9001 and 17025 certified and accredited laboratory, independent of the Company. Samples submitted through ALS are run through standard prep methods and analysed using Au-AA23 (Au; 30g fire assay) and ME-ICP41 (35 element suite; 0.5g Aqua Regia/ICP-AES) for ALS. ALS also undertakes their own internal coarse and pulp duplicate analysis to ensure proper sample preparation and equipment calibration. i-80 Gold Corp’s QA/QC program includes regular insertion of CRM standards, duplicates, and blanks into the sample stream with a stringent review of all results.

Tim George, PE, Mine Operations Manager, reviewed the technical and scientific information contained in this press release and is a Qualified Person within the meaning of NI 43-101.

i-80 Gold Corp. is a well-financed, Nevada-focused, mining company with a goal of achieving mid-tier gold producer status through the development of multiple deposits within the Company’s advanced-stage property portfolio with processing at i-80’s centralized milling facility that includes an autoclave.

Certain statements in this release constitute “forward-looking statements” or “forward-looking information” within the meaning of applicable securities laws, including but not limited to, the expansion or mineral resources at Ruby Hill and the potential of the Ruby Hill project. Such statements and information involve known and unknown risks, uncertainties and other factors that may cause the actual results, performance or achievements of the company, its projects, or industry results, to be materially different from any future results, performance or achievements expressed or implied by such forward-looking statements or information. Such statements can be identified by the use of words such as “may”, “would”, “could”, “will”, “intend”, “expect”, “believe”, “plan”, “anticipate”, “estimate”, “scheduled”, “forecast”, “predict” and other similar terminology, or state that certain actions, events or results “may”, “could”, “would”, “might” or “will” be taken, occur or be achieved. These statements reflect the Company’s current expectations regarding future events, performance and results and speak only as of the date of this release.

Forward-looking statements and information involve significant risks and uncertainties, should not be read as guarantees of future performance or results and will not necessarily be accurate indicators of whether or not such results will be achieved. A number of factors could cause actual results to differ materially from the results discussed in the forward-looking statements or information, including, but not limited to: material adverse changes, unexpected changes in laws, rules or regulations, or their enforcement by applicable authorities; the failure of parties to contracts with the company to perform as agreed; social or labour unrest; changes in commodity prices; and the failure of exploration programs or studies to deliver anticipated results or results that would justify and support continued exploration, studies, development or operations.