“The Company continues to aggressively pursue our peer-best production growth strategy.”, stated Ryan Snow, Chief Financial Officer of i-80. “Several key development milestones have been achieved in the first half of the year along with continued exploration success, demonstrating the potential to extend known mineralization. In addition, the gold prepay and silver purchase and sale agreements funded during the quarter and gold sales continued from the residual leaching at Ruby Hill and Lone Tree resulting in a cash balance of $101 million dollars.”

Lone Tree is expected to become the hub of i-80’s Nevada operations and the central processing facility for mineralization from the first four planned mining projects.  Importantly, Lone Tree is host to infrastructure that, following successful refurbishment efforts, will position i-80 as one of only three companies in the United States capable of processing both oxide and refractory mineralization.

During the quarter, the Company advanced a detailed engineering study for the restart of the autoclave.  The study is progressing on plan and is expected to be completed in the second half of 2022. The Company also continued permitting for the development of the Buffalo Mountain open pit where gold mineralization is expected to be processed at the Lone Tree leach pad facility.

In the second quarter, 2022, drilling continued for resource expansion on the Ogee and South Pacific Zones with multiple high-grade intercepts. Completed 23,944 feet of core drilling and 8,157 feet of RC drilling. The amount of drilling completed as of June 30, 2022 totaling 71,952 feet was in line with the Company’s drilling plan. Drilling targets were expansion and delineation of the newly discovered South Pacific Zone as well as delineation drilling that targeted the Otto, Adam Peak, and Ogee fault zones with underground drilling.

Construction of the exploration decline continued on plan and has been advanced approximately 1,300 feet. Additional work on metallurgical and hydrology studies, engineering of de-watering and mining options, and reclamation activities associated with the inactive tailings storage facility is also being advanced.

A major, multi-drill, exploration campaign is underway that will see a minimum of 20,000 metres drilled in 2022 followed by a resource update. Multiple gold and polymetallic deposits and exploration targets exist on the property with mineralization open along strike and at depth.

The Company has commenced permitting for the construction of a decline to access the high-grade Ruby Deeps deposit and the Blackjack Zone with the intent of trucking refractory mineralization for processing at Lone Tree.

In the second quarter, infill and step-out drilling of the Ruby Deeps zone continued with multiple high-grade intercepts and multiple brownfield exploration targets were tested. 21,595 feet of core drilling and 25,150 feet of RC drilling was completed during the quarter, with a combined total of 73,935 feet completed in the first half, in line with the Company’s drilling plan. Owing to the substantial success of the 2022 exploration campaign at Ruby Hill, the program has been expanded.

The scientific and technical information contained in this press release was reviewed by Tim George, PE, Mining Operations Manager, and a Qualified Person within the meaning of National Instrument 43-101.

Forward-looking statements and information involve significant risks and uncertainties, should not be read as guarantees of future performance or results and will not necessarily be accurate indicators of whether or not such results will be achieved. A number of factors could cause actual results to differ materially from the results discussed in the forward-looking statements or information, including, but not limited to: material adverse changes, unexpected changes in laws, rules or regulations, or their enforcement by applicable authorities; the failure of parties to contracts with the company to perform as agreed; social or labour unrest; changes in commodity prices; and the failure of exploration programs or studies to deliver anticipated results or results that would justify and support continued exploration, studies, development or operations. For a more detailed discussion of such risks and other factors that could cause actual results to differ materially from those expressed or implied by such forward-looking statements, refer to i-80’s  filings with Canadian securities regulators, including the most recent Annual Information Form, available on SEDAR at www.sedar.com.

The Company has included certain terms or performance measures commonly used in the mining industry that are not defined under IFRS in this document. These include: by-product cash cost per ounce sold, by-product all-in sustaining cost (“AISC”) per ounce sold, earnings before interest, tax, depreciation and amortization, capital expenditures (expansionary), capital expenditures (sustaining), adjusted net earnings and average realized price per ounce. Non-IFRS financial performance measures do not have any standardized meaning prescribed under IFRS, and therefore, they may not be comparable to similar measures employed by other companies. The data presented is intended to provide additional information and should not be considered in isolation or as a substitute for measures prepared in accordance with IFRS and should be read in conjunction with the Company’s Financial Statements.

Average realized gold price represents the sales price of gold per ounce before deducting mining royalties, treatment and refining charges as well as gain or losses derived from the offtake agreement with Orion.

By-product credits include revenues from the sale of by-products from operating mines.

Capital expenditure (expansionary) is a capital expenditure intended to expand the business or operations by increasing production capacity beyond current levels of performance and includes capitalized exploration.

Exploration and evaluation (sustaining) expense is presented as mine site sustaining if it supports current mine operations.

Average realized gold price per ounce of gold sold is a non-IFRS measure and does not constitute a measure recognized by IFRS and does not have a standardized meaning defined by IFRS. It may not be comparable to information in other gold producers’ reports and filings. 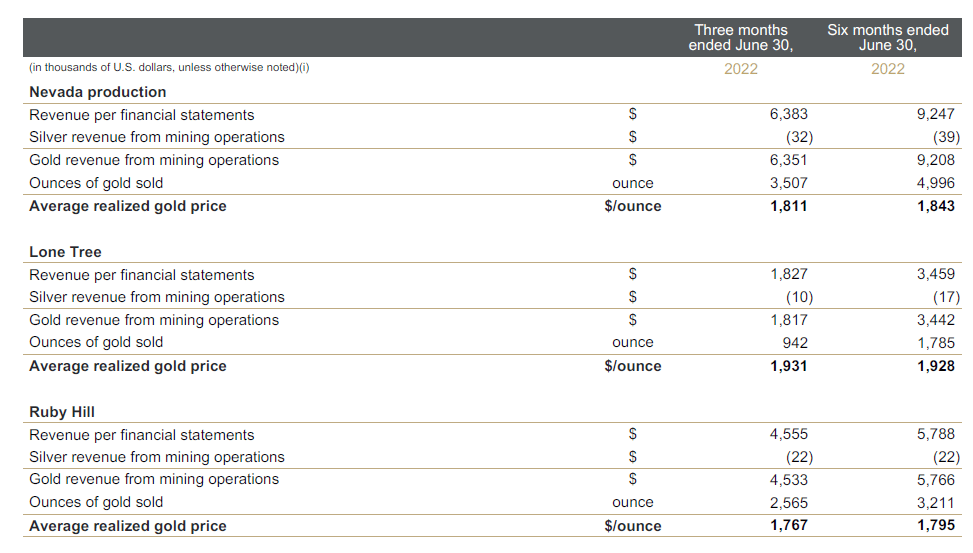 Cash costs per ounce sold represents all direct and indirect operating costs related to the physical activities of producing gold, including on-site mining costs, processing, third-party smelting, refining and transport costs, on-site general and administrative costs, community site relations, royalties and royalty tax. State of Nevada net proceeds taxes are excluded. Cash costs incorporate the Company’s share of production costs but exclude, among other items, the impact of depletion, depreciation and amortization (“DD&A”), reclamation costs, financing costs, capital development and exploration and income taxes. In order to arrive at consolidated cash costs, the Company includes its attributable share of total cash costs from operations where less than 100% interest in the economic share of production is held.

Cash cost: by-product – When deriving the cash costs associated with an ounce of gold, the Company includes by-product credits, as the Company considers that the cost to produce the gold is reduced as a result of the by-product sales incidental to the gold production process. Accordingly, total production costs are reduced for revenues earned from silver sales.

Cash costs per ounce is a common financial performance measure in the mining industry, but the term does not have any standardized meaning. In determining its cash cost and cash cost per ounce, the Company has considered the guidelines provided by the World Gold Council, a non-regulatory, non-profit market development organization for the gold industry. A Company’s adoption of the standard is voluntary and other companies may quantify these measures differently as a result of different underlying principles and policies applied.

AISC include total production cash costs incurred at the Company’s mining operations, which forms the basis of the Company’s by-product cash costs. Additionally, the Company includes sustaining capital expenditures which are expended to maintain existing levels of production (to which costs do not contribute to a material increase in annual gold ounce production over the next 12 months), rehabilitation accretion and amortization, general and administrative (excluding stock compensation) and exploration and evaluation expenses. The measure seeks to reflect the full cost of production from current operations, therefore expansionary capital is excluded. Certain other cash expenditures, including tax payments (including the State of Nevada net proceeds tax), dividends and financing costs are also excluded. The Company reports AISC on a per ounce sold basis.

This financial performance measure was adopted as a result of an initiative undertaken within the gold mining industry; however, this performance measure has no standardized meaning and should not be considered in isolation or as a substitute for measures of performance prepared in accordance with IFRS. In determining AISC, the Company has considered the guidelines provided by the World Gold Council, a non-regulatory, non-profit market development organization for the gold industry. A Company’s adoption of the standard is voluntary and other companies may quantify these measures differently as a result of different underlying principles and policies applied.

The following table provides a reconciliation on a by-product basis for gold cash cost and AISC for the three and six months ended June 30, 2022: 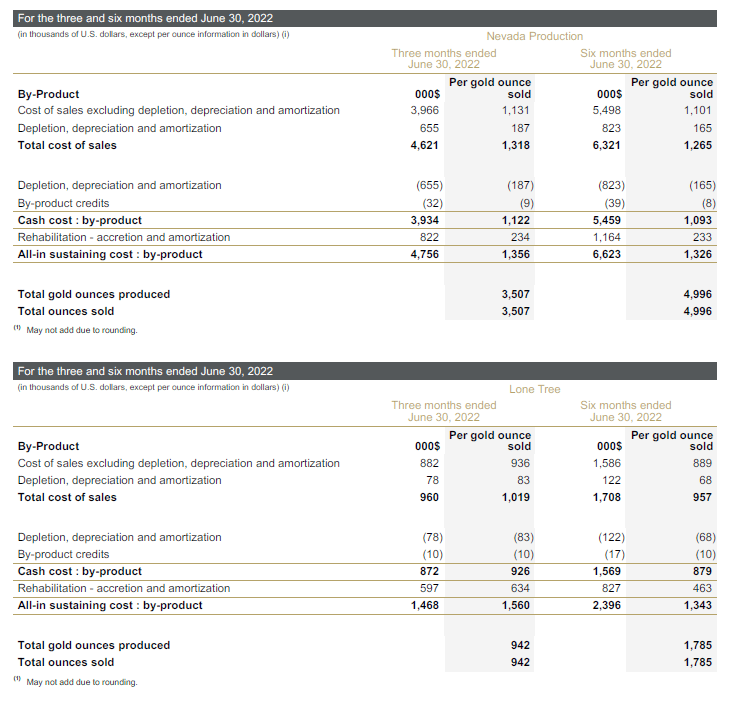 The following table shows a reconciliation of adjusted earnings for the three and six months ended June 30, 2022 and 2021, to the net earnings for each period. 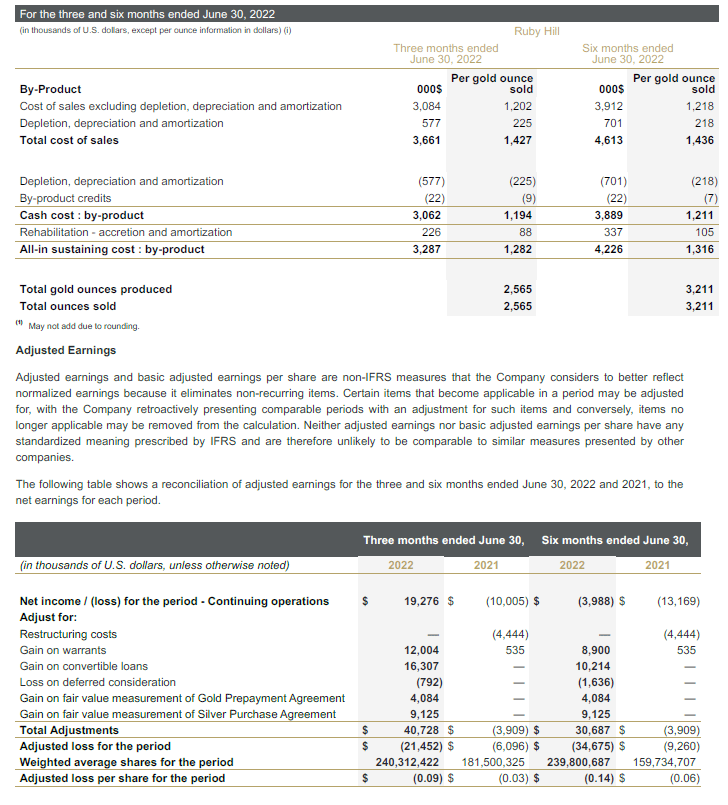