“Beginning on the first day of trading in April, 2021, the i-80 team was acutely focused on building a tier‑one operations team to realize the Company’s goal of becoming a significant gold producer in the state of Nevada”, stated Ewan Downie, Chief Executive Officer of i-80. “We immediately began executing our plan by augmenting our property portfolio with the closing several strategic asset acquisitions and commencing mine development. By solidifying our balance sheet through the completion of successful financings, i-80 is now in the enviable position of aggressively realizing our peer-best growth plan to become one of the leading gold producers in the United States.”

On October 14, 2021, the Company completed the Asset Exchange with NGM (a joint-venture between Barrick Gold Corporation and Newmont Corporation). The Asset Exchange resulted in the Company acquiring the Lone Tree and Buffalo Mountain gold deposits and certain processing infrastructure, including an autoclave, from NGM in consideration for: (i) the Company’s 40% ownership in the South Arturo Property; (ii) assignment of i-80 Gold’s option to acquire the adjacent Rodeo Creek exploration property; (iii) contingent consideration of up to $50 million based on production from the Lone Tree property; and (iv) arrangement of substitute bonding in respect of the Lone Tree and Buffalo Mountain reclamation obligations. The Lone Tree and Buffalo Mountain Properties were acquired by i-80 Gold’s indirect wholly-owned subsidiary Goldcorp Dee LLC (“Goldcorp Dee”). In connection with the Asset Exchange the Company recognized the fair value of the assets acquired and derecognized the book value of 40% of the South Arturo mine. The difference between these two values resulted in a one-time non-cash gain net of tax of $106.7 million dollars.

At both operations, no gold ounces were produced and sold as residual heap leaching continued and the 1,733 gold ounces from Lone Tree and 1,312 gold ounces from Ruby Hill contained in loaded carbon which were produced had not yet been further refined as a finished product as of December 31, 2021. All operating costs were capitalized as inventory and will be recognized as operating income (loss) as revenue from the ounces produced is recognized. 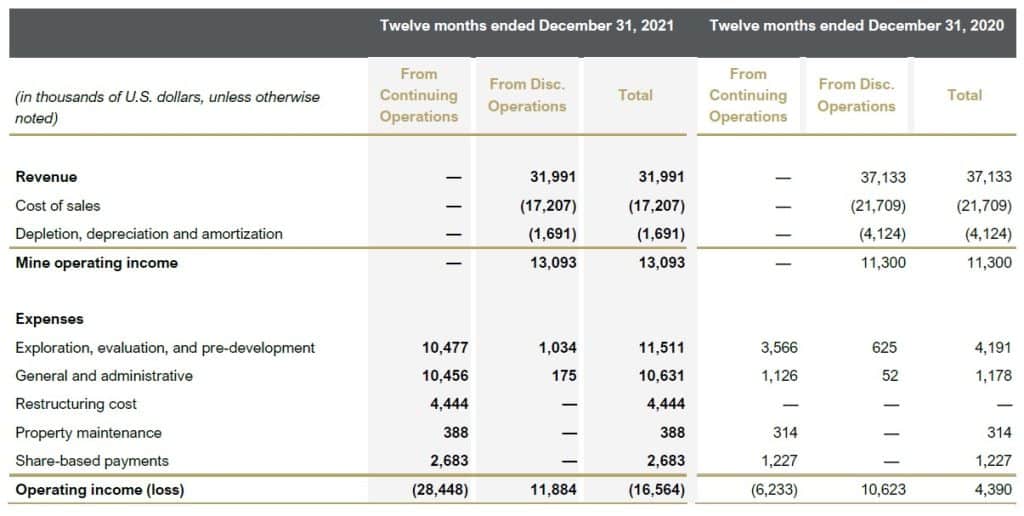 Mine operating income of $13.1 million for the twelve months ended December 31, 2021 increased $1.8 million over the comparable period of 2020 mainly due to an increase in depletion, depreciation and amortization ($2.4 million due to lower ore tons milled), partly offset by lower cash operating income ($0.6 million).

Operating loss for the twelve months ended December 31, 2021 of $16.6 million changed $21.0 million from the operating income of $4.4 million for the twelve months ended December 31, 2020 due to an increase in operating income from discontinued operations ($1.3 million) offset by an increase in operating loss from continuing operations of $22.2 million mainly due to increased exploration expenditures at Granite Creek, the inclusion of general and administrative expenses as a result of i-80 being a stand alone entity, and corporate restructuring costs.

Exploration, evaluation and pre-development total expenses of $10.5 million for the twelve months ended December 31, 2021 increased $6.9 million over the twelve month period ended December 31, 2020 primarily as a result of the exploration and rehabilitation work that was started at Granite Creek, an increase in expenses for discontinued operations (South Arturo) for exploration and delineation drilling, partly offset by a decrease in expenditures at McCoy-Cove.

Restructuring cost of $4.4 million for the twelve months ended December 31, 2021 resulted from $2.5 million for change in control payments to executives associated with the Company’s operations and a tax withholding payment of $2.0 million that was paid by i-80 Gold, as an agent, on behalf of Premier Canada. As the withholding tax does not belong to i-80 Gold, and as Premier Canada is owned by Equinox Gold Corp., the Company recorded the withholding tax as a restructuring cost, as contemplated in the Agreement.

Lone Tree is expected to become the hub of i-80’s Nevada operations and the central processing facility for mineralization from the first four planned mining projects.  Importantly, Lone Tree is host to infrastructure that, following successful refurbishment efforts, will position i-80 as one of only three companies in the United States capable of processing both oxide and refractory mineralization. Currently on care and maintenance, the Property hosts strategic infrastructure that includes a whole ore autoclave with capacity of 1M Tonnes/year, a flotation circuit with capacity of 1.8M Tonnes/year, a CIC circuit & leach pad with 6.5M Tonnes of remaining capacity, a waste dump, along with several buildings useful for the development of all i-80’s projects including a warehouse, maintenance shop, administration building and assay lab.

In Q1-2022, the Company awarded the contract to complete a detailed engineering study for the restart of the autoclave to Hatch Ltd. and continued permitting for the development of the Buffalo Mountain open pit where gold mineralization is expected to be processed at the Lone Tree leach pad facility. An initial resource for Buffalo Mountain is expected to be complete in H1-2022.

i-80 considers the Lone Tree infrastructure to be the most strategically located processing facility in Nevada, located on Interstate 80 with the Nevada Railway less than two kilometres to the north, and will be the platform from which i-80 intends to grow its business.

During the quarter, five drill rigs were utilized, drilling a total of 29 holes for 9,971 meters from surface and 38 holes for 5,167 meters from underground year-to-date. Priority targets include the delineation and expansion of the newly discovered South Pacific Zone and from underground, the Range Front, Otto, Linehole, and Adam Peak Zones.

Other expenditures during the three and twelve-month periods were primarily associated with a preliminary economic assessment of the project, rehabilitation of the underground ramps and drill bays, test mining in the Otto zone, evaluation, re-entry, and repairs to buildings and other surface infrastructure, and evaluation and maintenance of mobile equipment.

The primary goal of the 2022 program is to advance the underground deposit to production and advance permitting and feasibility work on the open pit opportunity. Underground drilling is focused on delineating sufficient resources for mine development and sustained mining operations.

Expenditures during the fourth quarter of 2021 were for metallurgical and hydrology studies, engineering of de-watering and mining options, and reclamation activities associated with the inactive tailings storage facility. The Board of Directors of the Company approved an exploration decline and underground drilling program at the McCoy-Cove Project in November, 2021. The underground program that includes the development of a portal and construction of a decline commenced in February, 2022. A 40,000 metre delineation drill campaign is expected to begin in the second half of 2022 from this underground infrastructure, followed by a feasibility study.

Ruby Hill includes an open pit mine and related infrastructure (mill / heap leach) and is located immediately west of the town of Eureka proximal to Highway 50. The Ruby Hill Property is host to multiple gold, silver and base metal deposits that collectively comprise one of Nevada’s largest mineral endowments that offer substantial upside. In Q4-2021, i-80 launched a multi-drill campaign that will see a minimum of 20,000 metres drilled in 2022 followed by a resource update. All deposits remain open along strike and at depth.

Multiple gold and polymetallic exploration targets exist on the property and i-80 will begin permitting for the construction of a decline to access the high-grade Ruby Deeps deposit and the Blackjack Zone with the intent of trucking refractory mineralization for processing at Lone Tree.

In the fourth quarter, 2021, three drill rigs were utilized, drilling a total of five holes for 2,997 meters. Three of the five holes were completed with the remaining two comprising pre-collars for drilling to be completed at a later date.

The Company will host a live conference call and webcast on March 29, 2022, commencing at 10:00 am ET, providing the opportunity for analysts and investors to ask questions of i-80 Gold’s executive team.

A recording of the call can be accessed until April 5, 2022.

The scientific and technical information contained in this press release was reviewed by Tim George, PE, Mining Operations Manager, and a Qualified Person within the meaning of National Instrument 43­‑101.

Forward-looking statements and information involve significant risks and uncertainties, should not be read as guarantees of future performance or results and will not necessarily be accurate indicators of whether or not such results will be achieved. A number of factors could cause actual results to differ materially from the results discussed in the forward-looking statements or information, including, but not limited to: material adverse changes, unexpected changes in laws, rules or regulations, or their enforcement by applicable authorities; the failure of parties to contracts with the company to perform as agreed; social or labour unrest; changes in commodity prices; and the failure of exploration programs or studies to deliver anticipated results or results that would justify and support continued exploration, studies, development or operations. For a more detailed discussion of such risks and other factors that could cause actual results to differ materially from those expressed or implied by such forward-looking statements, refer to i-80’s  filings with Canadian securities regulators, including the most recent Annual Information Form, available on SEDAR at www.sedar.com.